EACH FABRIC HAS A STORY

Let us introduce you to our colourful world of beautiful African print fabric! Their unique patterns and vibrant colours help you feel instantly happier, which is why we love using them to make modern Afrocentric clothing.

The Ankara African wax print fabric origin is complex and involves several continents in particular, Asia and its Batik art.

It all began when the Dutch colonised Indonesia in the 19th century - a place where Batik, the art of wax-resisting dye method on fabric, is prominent. 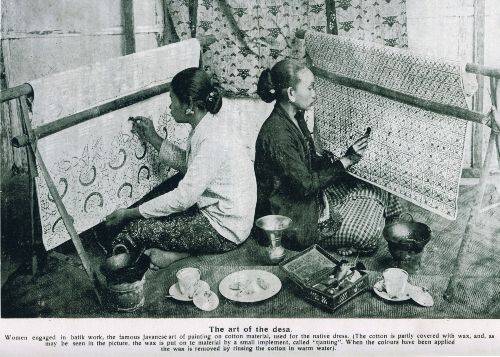 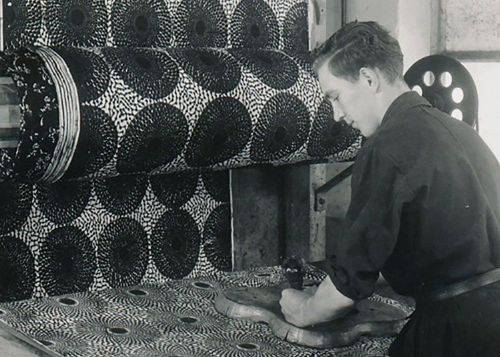 With the big boom of the Industrial Revolution happening at the time, the Dutch manufacturers realized they could mechanize the method used to make prints on batiks. Roller print and mechanisation techniques were used to make these wax print fabrics.

They attempted to market these styles to Indonesians, who preferred their own hand-dyed cloth. Consequently, the Dutch and British manufacturers then turned to the West African market. It really took off in Nigeria and Ghana as these industrial prints inspired by batiks had some similarities with the West African traditional local tie-dye but were still exotic in a way. 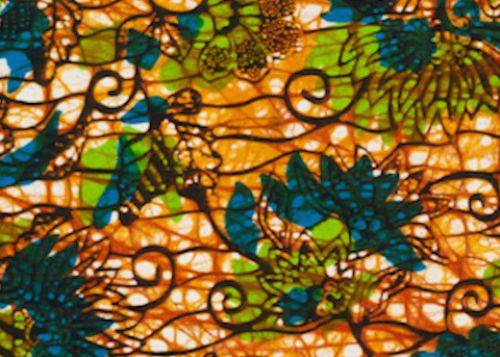 "The process of making Batik was mechanised by the Dutch and gained popularity in West Africa in the 19th century." 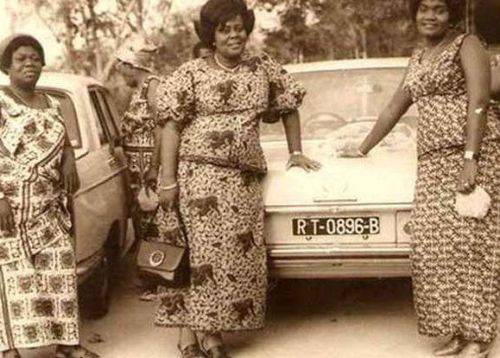 By the 20th century, the prints were adapted to reflect local traditional culture, where each ethnic group has its own preferences for colours and design while still retaining some elements of the batik design.

"Prints of the Batik were stylised to suit the taste of African art, usually bigger in scale and in brighter colours." 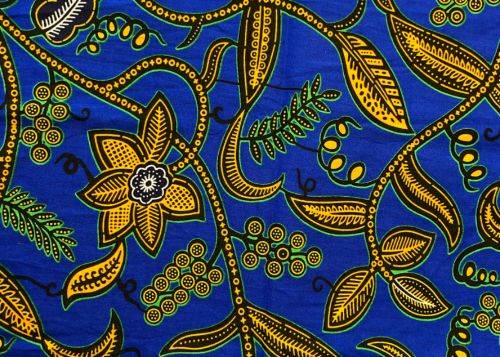 Prints of the Batik were stylised to suit the taste of African art, usually bigger in scale and in brighter colours. Common in African prints since their first production is the floral motif. The floral motif is continuous and comes directly from Indonesian batik - sometimes referred to as ‘the tree of life’. Stripes and dots is clearly visible in the motif. These characteristic white dots derive directly from the artisanal technique of Javanese batik, where the wax is applied using canting in small dots. 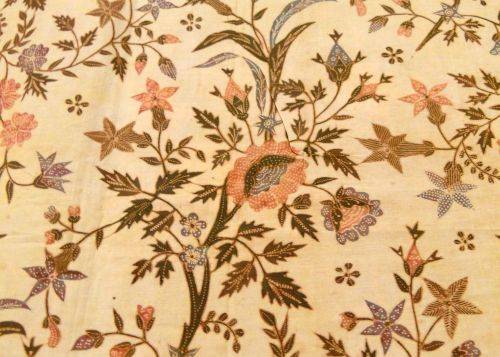 "Ankara African print fabric is more than a fashion style." 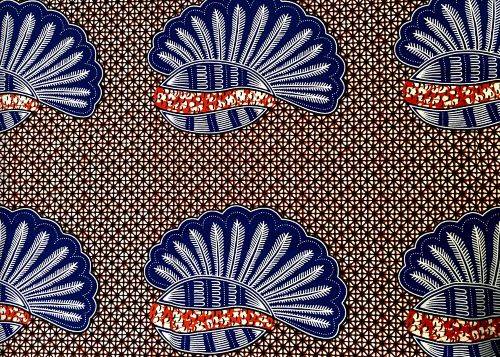 The most Africanised stylisation of the Indonesian pattern is the wings of the Garuda, a sacred bird in Hinduism and Indonesia's national emblem. As the Garuda was unheard of in Africa, its wings were reinterpreted into "the snail outside its shell" to "a hand of bananas". Many variations of the Garuda's wings can be seen in the African wax print. 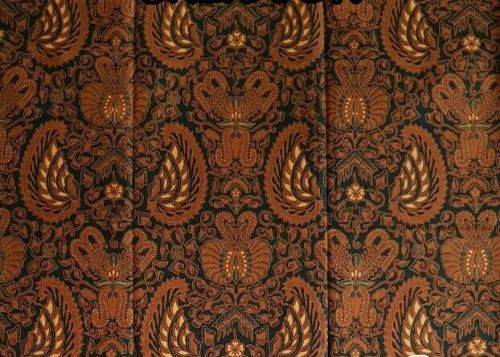 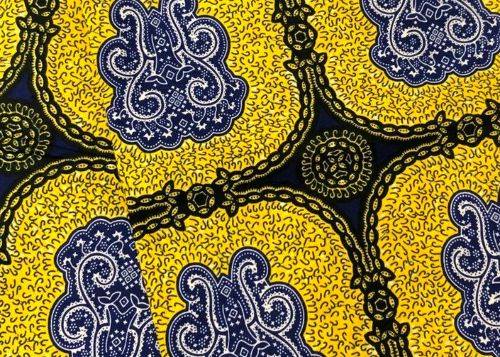 The wax print pattern 'Akyekydeɛ Akyi' means the back of the tortoise. This print really does resemble the back of a tortoise’s shell with its rough and oval shape taking after the housing of the land-based reptile. This print symbolises longevity and resilience. Even though the tortoise is slow, it is wise.

The tortoise pattern was reinterpreted from the Indonesian mask print called the Mask of Malangan, which were made as a symbolic depiction to honour the spirits of the ancestors. 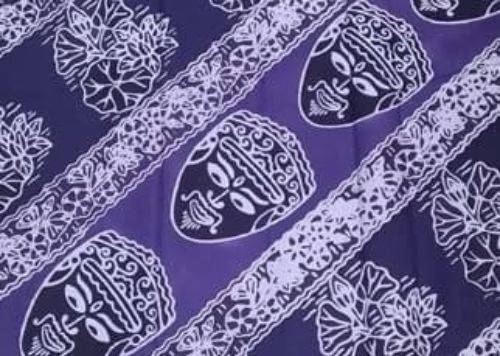 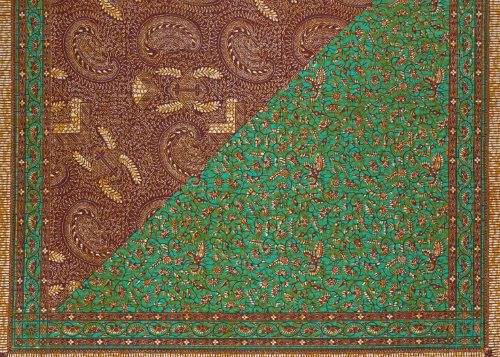 The day & night print consists of two different motifs which meet diagonally in the middle. This enabled wearers in Indonesia to don the batik twice – in the morning and in the evening.The practical yet beautiful invention was created for multiple use due to cotton scarcity during the Japanese occupation in the 1940s. The two motifs come in stark colours. The lighter side worn for daytime while the darker colour is reserved for evening wear.

In Africa, it is called "Obofa Dadefa". It is said to refer to dual-heritage children, often seen as impure, torn, fragile, or disloyal. In this case, Obofa Dadefa carries a direct translation of 1/2 stone and 1/2 iron, carrying a more positive connotation, 'strength', for mixed-race people.

It remains a favourite by many in both Indonesia and Africa. 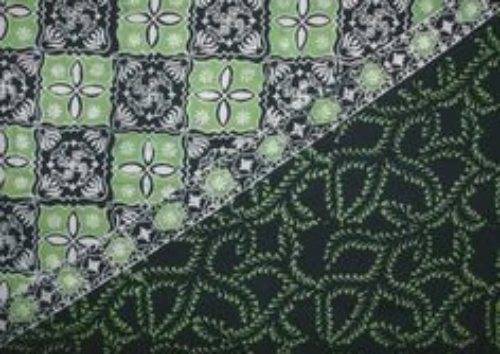 The link between Batik and African print serves as an everyday, material reminder of Afro-Asian connections traced back to centuries. The African print is a significant display of our collective history. A showcase of diverse influences of Africa and Asia through textile.

With the bird being such an important symbol in many cultures, this fabric has gained a variety of meanings, often referring to change, prosperity, freedom and transition. In Ghana the pattern refers to the transience of riches: rich today, poor tomorrow, for money has wings and can fly away. But the pattern also symbolises asking for a favour, such as the hand of a young woman. In Togo the pattern is called “”Air Afrique”” because the fabric was also used in the uniform of the local airline company.In the Ebo region it is called Eneke, and it is said that if the hunters learn to shoot without missing, they have learned to fly without perching. 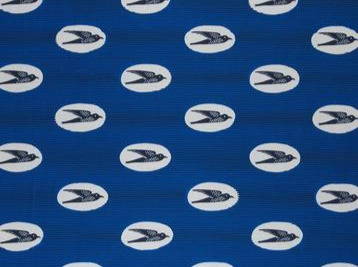 ‘Grotto’ is an Ivorian term that refers to a well-off person who enjoys social recognition. Wearing this fabric affirms the high social status to which a woman belongs by her own merit or thanks to her wealthy spouse. The Grotto is one of the successful pagnes that have gone through the generations in Côte d’Ivoire.In Ghana this fabric is called “Papa Ye Asa”, which means “”goodness is finished””. The meaning behind “Papa Ye Asa” is that no matter what you do for your fellow human being he/she will never be grateful. 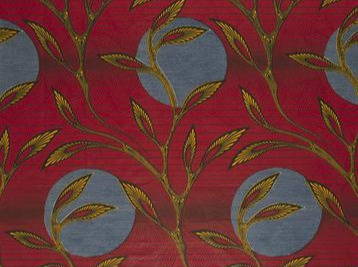 Genito” is a virile young lover, while “Grotto” is a wealthy, fat, older uncle. In Ivory Coast they also speak of “Le cheque et le choque”, ‘The cheque and the scare’, referring to the older rich man who adores young, beautiful women. 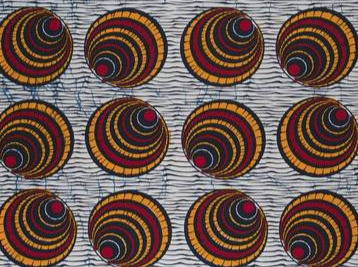 This pattern has many meanings. The names “Cha Cha Cha” and ‘Change your Life’ are derived from the rhythm of the pattern. ‘Senchi Bridge’ refers to a bridge over the Volta River in Ghana, a suspension bridge that sways violently when crossed. In Togo the pattern is called “Aganmakpo”, which means the back of a chameleon, an animal that symbolises change. And in Ivory Coast this pattern was called “La Danse à la Mode” after the war in that country. 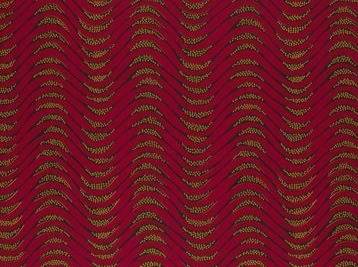 The name “Aklepan” refers to an instrument used in the “Oracle Fa-“, a voodoo ritual. Perhaps it is the instrumental nature of this pattern that inspired the traders to name the fabric thereafter. 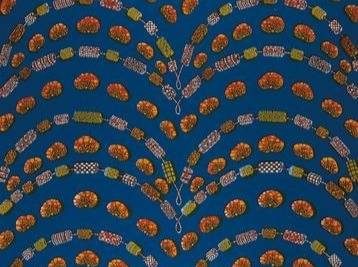 In Togo this pattern has acquired a special meaning. The drawing depicts the state of mind of a woman who knows her husband is cheating on her and is leaving her with a “Cœur Blessé”, a broken heart. 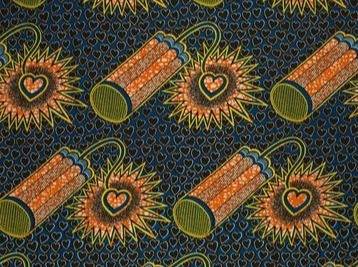 This popular fabric in DRCongo is called ‘Village Molokai’, as connecting the village of Molokai in DRCongo to the village depicted on the design. The pattern is also called “Guerre de Shaba”, ‘The War of Shaba’, on account of the struggle for independence that broke out in Shaba, a province in the southern part of DRCongo, now known as Katanga. 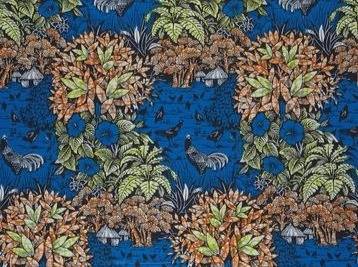 The Hibiscus pattern is especially popular in Guinea and Ivory Coast. Twelve yards are regarded as essential to a bride’s dowry: ‘No Hibiscus, no Wedding.’ The pattern is known by several other names, including “Topizo” in Togo and “Tohozin” in Benin (both meaning ‘rush’), alluding to the day it first went on sale, when it was met by a rush of customers. In 1970, it was adopted by Air Zaire’s flight attendants as their uniform. 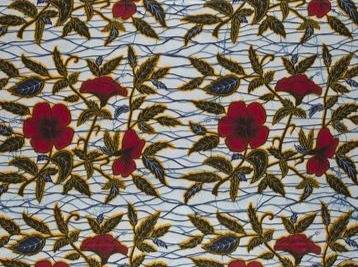 ALSO KNOWN AS I run faster than my Rival

The names of many patterns identify with a woman’s family and marital relationships. In Côte d’Ivoire, the classic Jumping Horse, also known as “Je Cours Plus Vite Que Ma Rivale” (I Run Faster than My Rival), expresses the rivalry between co-wives. In Nigeria, Igbo women favor this design for Aso-Ebi (uniform cloth) to express unity at their annual women’s meeting, held every August. 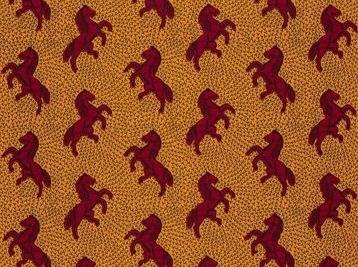 The name Ankara is believed to have its origin from a girl called, well, Ankara. Many stories abound. Ankara, commonly known as “African prints” or “African wax prints”, is a 100% cotton fabric with vibrant patterns that possesses great strength with its tight weaving. African wax print fabric is a defining metaphor of African design, fashion and expression; an immediately recognisable icon throughout the world. Quite simply, it just says, “Africa”. Ankara was formerly known as “Dutch wax print”. It was originally manufactured by the Dutch for the Indonesian textile market. But, by luck or by design, these prints garnered significantly more interest in West African countries such as Ghana, Nigeria and Senegal, than in Indonesia. Recognizing this opportunity, the Dutch decided to focus on West Africa. As African countries gained independence in the 20th century, they built their own textile mills and started creating designs reflecting traditional African culture.The prints have since then evolved to truly reflect African culture and lifestyle. At first, Ankara was reserved for special occasions. People felt that the fabric was too flowery and too colourful for everyday wear. There was even a time when Ankara textiles were thought of as the fabric of the poor. But today, it has undergone a transformation to become the fabric of choice for many. To the knowing eye, the design on a textile reveals a story, often meaningful to the wearer. The colours may also provide information about the wearer’s tribal origin, social standing, age and marital status. Dress plays an important role in African society, and has even been used as a form of protest. Designs and the way they were worn often made quiet but effective commentary on the colonial establishment. Colours in African prints have an intimate association with tribes and regions. Sepia-ochre is generally accepted across Africa as the colour used to represent earth. Yellow is the colour of initiation in Nigeria, while the combination of yellow/red belongs to the Igbo tribe of southeastern Nigeria. African print designs fall into fours main categories: – Women’s lives (family, love, housework) – Society and what it brings, good or bad (alphabet, television, money, power) – Nature (animals, flowers) – Rhythm (music, drums)

*All the info related to the fabrics are courtesy of VLISCO